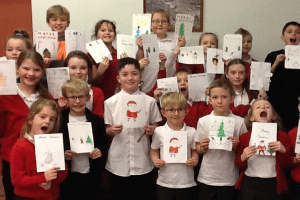 With an international partnership that's coming up to 15 years long, Southroyd is thrilled to be applying for its 5th International School Award. As part of the British Council awards, schools are invited to reflect their global dimension and international work, through seven projects during the school year, which include 3 projects working with international schools.

Pupils are currently working on a "World Changers" project, where they discuss the merits of key figures in history, talking about who has made the most positive difference to our World. With the project being launched on Martin Luther King's birthday, children have already talked about campaigners, scientists and technologists who they want to nominate for their "World Changers".

The project, which ends in early February with all families and children taking part in a vote, is also being managed in Bachpan School in Gujarat, so both schools are looking ofrwrad to comparing notes on who are their global heroes.

The photo shows members of the School Council with penpal letters from France.